F&M Trust today announced a donation of $5,000 to the McConnellsburg Lions Club. The contribution will allow the organization to upgrade the playground at Lions Community Park.

“Everyone knows how important parks are to our communities. Our kids need safe places where they can go, spend some time outside, and enjoy the beauty that surrounds them,” said Tim Henry, President and CEO of F&M Trust. “Lions Community Park is one of those places, and F&M Trust is pleased to make this donation to the Mercersburg Lions Club so it can continue to provide that opportunity for families in Fulton County."

The playground upgrade, which includes the purchase of new equipment, has been in the planning stage for some time, according to Lions Club Treasurer Rick Strait. The project has been delayed by the COVID-19 pandemic, which also caused the cancellation of the organization’s annual dinner/auction, a major fundraiser.

“This donation is a tremendous help to the Lions Club and Recreation Center of reaching our goal of replacing the playground equipment at our park, which provides the community's children a safe place to play,” Strait said. 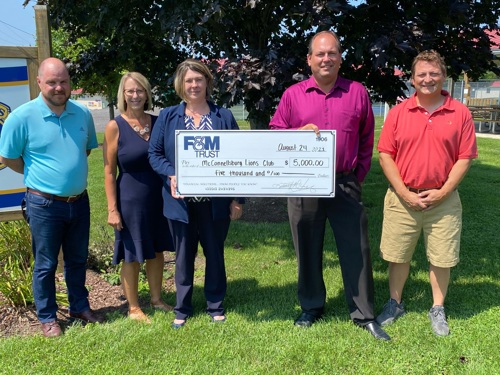