When F&M Trust was presented with the opportunity to rename Trojan Stadium, Tim Henry, the bank’s president and CEO, turned it down. 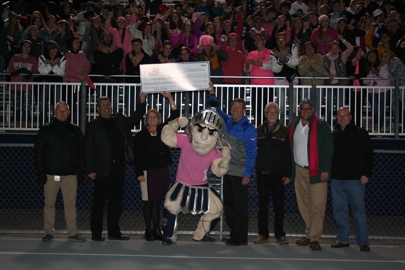 The naming rights were granted as part of a $100,000 commitment F&M Trust made to the Chambersburg Area School District.

But F&M Trust chose not to rename the stadium, rather to protect the field’s namesake, which is a vital part of the school district, Chambersburg High School and the students and faculty who benefit from the facility.

“We felt strongly that the right thing to do was to keep the name, Trojan Stadium, to preserve its legacy for future generations,” said Henry. “This is a significant commitment for us, and we are looking forward to continuing our partnership with the Chambersburg Area School District.”

It does not preclude other financial institutions and businesses from supporting the school district.

The funds invested by F&M Trust will primarily be used to support student extra and co-curricular programs. As of yet, the funds have not been used for any particular program, but in the future, they could be used to offset costs for sports equipment, travel costs for academic clubs and stadium field and track maintenance, among other expenses.

Outside of the cost for maintaining the naming rights program, which includes stadium signage, all funds will directly benefit local students.

“The district thanks F&M Trust for becoming a corporate sponsor and investing in the future success of our students. The funds provided through this agreement will have a direct, positive impact on our district by providing non-traditional funding that will offset costs for student extra and co-curricular programs. We look forward to working together with the leadership at F&M Trust in the shared goal of providing the best possible education for Chambersburg area students,” said Joseph Padasak, superintendent of the Chambersburg Area School District.

F&M Trust gives back to community at company-wide event